The essays have been copyedited, sent back to their authors, and some have even been returned to the publisher! Eric Burin’s Protesting on Bended Knee: Race, Dissent and Patriotism in 21st Century America, is slipping gently into the production phase at The Digital Press at the University of North Dakota.

Yesterday morning, I started to think about how the book would look. I will keep the book at the 5.5 x 8.5 size to keep some continuity with Eric’s Picking the President from 2017. I’ve made the margins a bit more generous on the inside of the page to give the text block a little more room from the binding. I will keep the formality of the Janson font because it suits the seriousness of the book’s topic.

As for the first page of every chapter, Eric suggested that we try to use a font that evokes the Civil Rights era posters from the 1960s. Like everyone, I immediately grabbed an image of the famous I AM A MAN poster.

Of course, it was likely wood type or even hand-lettered like many of the posters of that era, so it was a bit of a non-starter. I did try a vaguely art deco Rosina, that I used on the cover of Haunted by Waters.

I’m not sure that this font really works even if I do love the low strokes on the E (and, on the A which would evoke the low stroke on the “A” in I AM A MAN.)

For all the pages, I’d like to continue my emerging house style of using a small icon next to the title of each contribution. In this case, I’m using the fist from the cover of the book, which I think will be rendered in a bit less of a sketchy style in the final version. It will also evoke the Black Power protests at the 1968 Olympics on October 16th, which will coincide with our release date for the book. 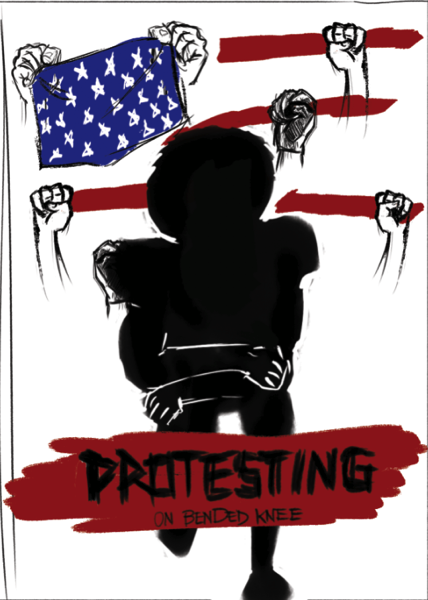 I think I’ll go with a simpler sans serif font for the chapter titles. I’ve recently been enamored with FF Meta (which would allow for a little unintentional trolling, if you know the recent history of this font’s use).

I also need to breathe some more room into the header of the page. I am trying to get a bit more sensitive in my use of negative space to create both balance on the page and as a form of emphasis without changing font sizes and weights. (I have this idea that for some project in the future using the same fonts and sizes throughout using only all caps and negative space for emphasis).

The single fine line beneath the title gives it a bit of a 1990s vibe. I might leave it out of the final version, but for nostalgic reasons (I spent most of the 1990s with my head buried in a book!), I’ll leave it in for now.

As always, I post this stuff here because I want feedback (and praise, of course, but also I also enjoy snarky criticism!).