Haunted By Waters: The Future of Memory and the Red River Flood of 1997
Edited by David Haeselin 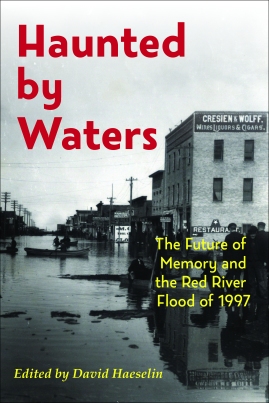 This twentieth anniversary of the Red River Flood of 1997, which devastated the town of Grand Forks, North Dakota and surrounding areas, gives a new generation of Grand Forksers and Red River valley citizens the occasion to look backward so that they can look forward. Taking stock of how the city and its people have changed in these last twenty years offers us a new chance to envision the future of Grand Forks and the Red River Valley. What’s more, we hope that this book can extend the lessons learned through the recovery to others coping with their own unique disasters.

The book emerged from a year long course in the University of North Dakota’s Writing, Editing, and Publishing Program led by Dr. David Haeselin. Students in this course compiled, organized, and edited unpublished archival documents from the Orin G. Libby Manuscript Collection in the Elwyn B. Robinson Special Collections of the Chester Fritz Library at the University of North Dakota with new contributions from citizens and experts who lived through the flood and the region’s recovery. The archival inclusions include government documents, student journalism, blueprints, design plans, and transcribed 911 calls. In pairing new stories with these archival documents, the project is set to inspire new discussions about how the city got to where it is today, so that more people can join the larger civic conversation about the right steps forward for the city, the state, the region, and our nation.

This book is not intended to be the final word on the flood. Rather, it attempts to carry on the conversation started by many other fine works that were released during the city’s recovery, many of which were originally published by the North Dakota Museum of Art. Haunted by Waters included excerpts of some of these works and provided a bibliography pointing the curious reader back to some of the seminal works on the 1997 flood and the city’s response. In this way, the book looks forward, forges new memories, and offers respectful attention to those who came before us. This is the best kind of public humanities in that it is local and civic-minded in attention and expansive in reach.

1. The Flood Today
What Does the Flood Mean Twenty Years Later? David Haeselin
We Survived the Red River Flood: A Tour of the Red River Valley Today. Student Editors.
Document: Blue Moose Timeline of the Flood. 1998.
Winter’s Labyrinth.  Janet Rex
What the Voices are Saying. Eliot Glassheim
Foreword from Voices from the Flood. Laurel Reuter
Rex Sorgatz Interview from Voices from the Flood. Kitty Maidenberg
Photograph: This was Home, Sweet Home. 1997.
Photograph: Anheuser Busch Drinking Water Can, 1997.
911 Call: The Water is Coming.

4. Town & Gown: The University during and After Crisis
Document: University Timeline Draft.
Document: Books Lost in the Flood.
Document: Flood Gauge Readings.
Photograph: Libraries Lost
Behind the Scenes at the University from Behind the Scenes.
The Unfolding. Janet Rex
It Was Like Nothing Else in My Life Up to Now. Josh Roiland
A Conversation with Professor Gordon Iseminger: A Fight for History. David Haeselin
911 Call: We are Officially Closed.