A Forthcoming Book from The Digital Press: Haunted by Waters: The Future of Memory and the Red River Flood of 1997

With any luck and a little concentration, The Digital Press at the University of North Dakota will release two books next week. I already mentioned the first book yesterday: Corinth Excavations Archaeological Manual. Today’s book is a bit more close to home here in the Red River Valley: Haunted By Waters: The Future of Memory and the Red River Flood of 1997, edited by David Haeselin and the advanced writing, editing, and publishing class in the English Department at the University of North Dakota. Here’s a sneak peek at the table of contents! 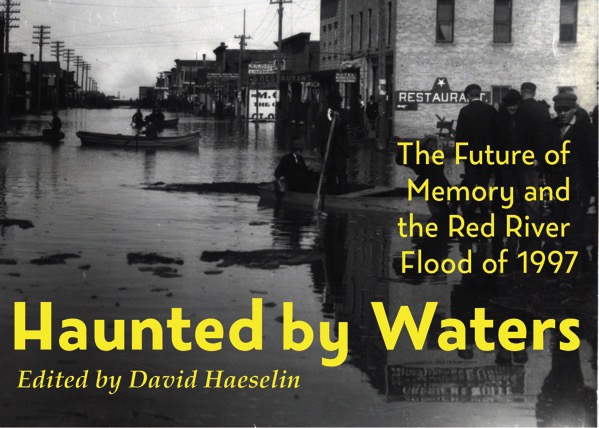 Here is press release that the class prepared announcing the book:

The Digital Press at the University of North Dakota is proud to announce the publication of Haunted by Waters, an anthology written, collected, and edited by Dr. David Haeselin and students from the writing, editing, and publishing certificate program in UND’s English department. Including new additions from various contributors and archival documents, this anthology explores the Greater Grand Forks area twenty years after the devastating Red River of the North flood of 1997.

As the twentieth anniversary of the Red River flood approaches, many citizens of Grand Forks have pushed the disaster to the back of their minds. People have since moved on, their houses rebuilt and their minds focused on the present. Grand Forks stands as a model of recovery for this reason: the city managed to recover and grow stronger.

Scheduled for digital publication on April 20, 2017 (with a print version available from May 1, 2017 via Amazon), Haunted by Waters offers readers a new chance to explore how communities came together to face of the historic disaster, how they recovered, and, for the first time, the composition of the community that survives the disaster two decades later.

Many University students are almost oblivious about the flood. If anything, they notice the monument standing proud and mighty near the Greenway, but few take the time to read the plaque or even approach the monument. They glimpse at it and then move on with their lives. Haunted by Waters offer readers the chance to slow down, to notice, to create a sense of memory. According to Dr. David Haeselin, the collection hopes to give these students all other readers “the occasion to look backward so that they can look forward.”

Janet Rex, librarian at the Chester Fritz, asks in her poem included in the book: “How can one convey disaster? The spaces of loss. Nothing flows so smoothly as water oozing over land, creeping through the grass, seeping into windows, cellars, filling streets like rivers, basements like pools.” Haunted by Waters tries it best to answer not just that question, but it also asks: what kind of Grand Forks do we want to see in the future? This collection provides new ways to enter to the historical conversation while also considering what it means to live in the Red River Valley today as workers, as neighbors, as authors, as professors, as students, and, most of all, as citizens. Twenty years later, these voices have more to say.

A book release event is scheduled for Thursday, April 20 at 6:00 p.m. at Rhombus Guys Brewing Company, 116 S. Third Street. This release is being planned in coordination with the city of Grand Forks’ twentieth anniversary observation. At this event, student editors will discuss their experiences editing the book and how building their sense of memory about the flood has changed the way they see Grand Forks and the University.

The Digital Press at the University of North Dakota serves “to publish timely works in the digital humanities, broadly conceived. Whenever possible, we produce open access, digital publications, that can attract local and global audiences” and the Writing/Editing/Publishing program at UND aims to teach its students “to produce and edit documents for diverse purposes in a variety of media and contexts.” Together, Haunted by Waters has been created by its editor(s) to embody these ideas while expanding the breadth of knowledge of the Red River Valley region’s history.