The Digital Press is Mobilizing the Past

Over the last six months, The Digital Press at the University of North Dakota has been collaborating with a remarkable group of authors, editors, and reviewers to produce an edited volume from an NEH funded conference called Mobilizing the Past for a Digital Future: The Potential of Digital Archaeology held last February in Boston. It was a good conference with good conversations among the participants. After a round of peer review and ample time for revision, the book will be more than just good and will stand as a significant marker in the discussion of digital tool in the discipline. I’m super proud and excited to be part of the project as both a contributor, collaborator, and publisher. The plan is for the book to appear this fall and so far we’re on schedule.

One of the most rewarding parts of the publication process is the design of the interior. For this book, I have been working with Dan Coslett, a graduate student in architecture at the University of Washington. He designed the original poster for the conference and I think it’s just great:

He’s going to design the book cover for us, and help me with interior design. Over the last couple days we went through no fewer than 9 iterations. We had a few challenges. First, after a little discussion, I insisted that we set the book in a serif font, but our “house font” for the press has been the rather stodgy (and 17th c.) Janson. This clearly was not an ideal font for a book that is looking toward our “digital future.” At the same time, I didn’t feel comfortable going with even the classiest sans serif font worrying that it would make what is a serious academic book seem ephemeral. Instead, I looked for a contemporary looking serif-ed font and settled on Tisa. Since I have a few projects on the horizon that might require a more technical, highly legible, and contemporary font, I think having Tisa share our house standard with Janson is a good thing. Finally, I continued a design cue that I used in the Bakken Goes Boom! (buy here or download here!)

My rather hasty first draft of the first page of the introduction looked like this: 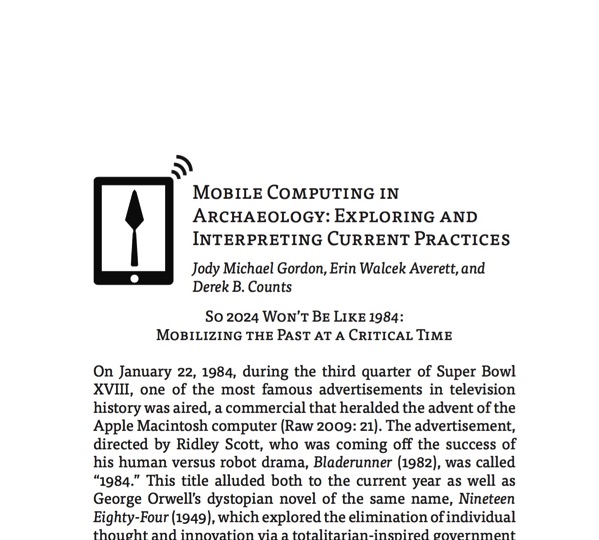 We thought it was probably a bit too crowded so we started to find ways to give it more space, by reducing the size of the font for the chapter title. 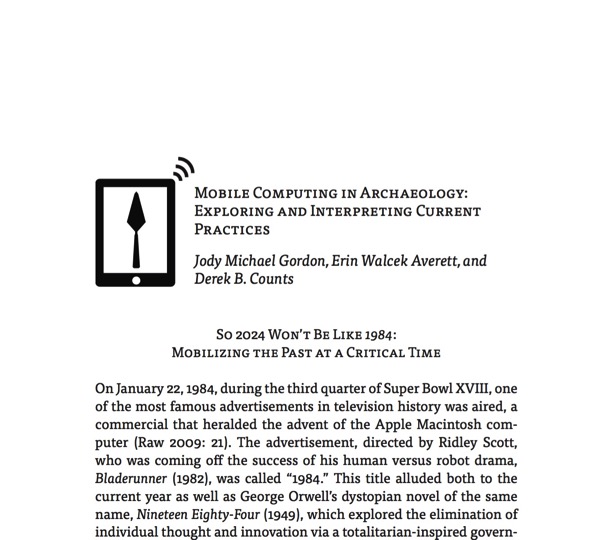 I have a tendency to go with very dense text blocks (probably similar to how I write and think!), and to counteract this we decided to expand the leading a bit in an early revision. Dan also suggested that his trowel-and-tablet graphic was maybe a bit too big for the page. Finally, we went decided to bold the chapter title instead of going with all caps especially since we’re going to use centered, all caps for the top headings in the chapters.

Of course, we couldn’t leave well enough alone and continued to play with the design, particularly the font size of the chapter title and the location of the authors’ names.

I tended to want a more prominent chapter title than Dan did: 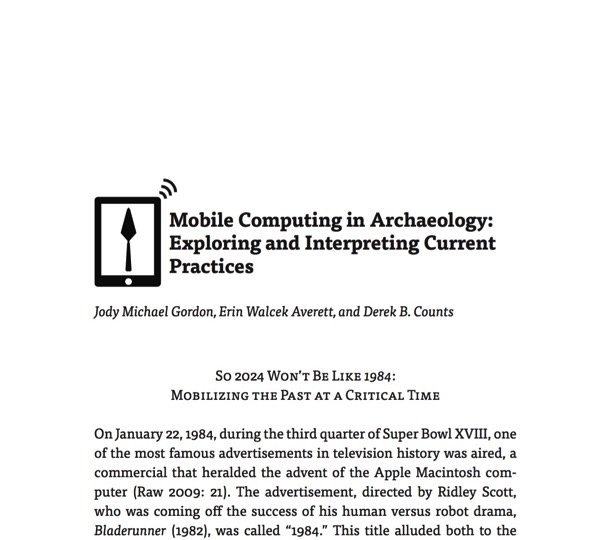 And we both couldn’t resist the lure of all caps!

Smaller title font allowed us to keep authors’ names and the title next to the trowel-and-tablet icon. 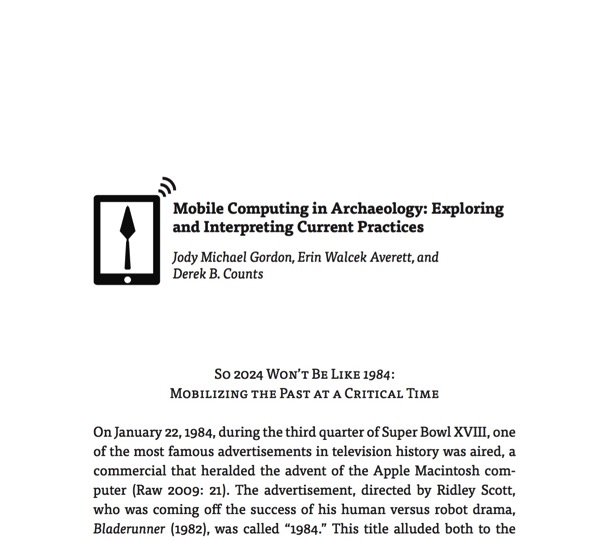 In the end we decided that was simply not that high a priority and likely to change as titles and numbers of authors varied across contributions.

Here’s our final decision (but even it will be lightly tweaked because I forgot to include the chapter number!):

More on this project as it gains momentum over the next few weeks. My hope is to have basic layout of the book done by early next week, a table of contents, and have a draft of the cover to show off then too!